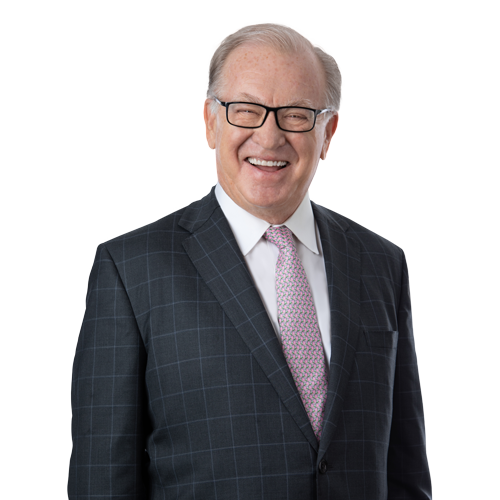 Member
Chair, Board of Directors

Jack McGinley is a trial attorney with more than 45 years of legal experience. He concentrates his practice in corporate, business, real estate, and professional liability matters. He also has significant experience in handling matters on behalf of nonprofit organizations. At Eckert Seamans, he serves as a member of the Board of Directors and chair of the Executive Committee.

Jack previously served in the public sector as an assistant district attorney of Allegheny County. He later cofounded the firm Grogan Graffam McGinley, P.C., where he practiced for more than 30 years before joining Eckert Seamans as an equity partner in 2002. Throughout his legal career, he has successfully tried numerous high-profile cases to verdict. He also chaired the Independent Regulatory Review Commission of Pennsylvania for more than 10 years and is a fellow of the American College of Trial Lawyers and member of the Academy of Trial Lawyers of Allegheny County.

Jack has complemented his legal career with various business interests and service to many nonprofit corporations. He is the former chair of Rockwood Casualty Insurance Company and the current chair and president of Ballymoney & Company, a business that develops and manages real estate properties. He has also served as a director of the Pittsburgh Steelers Football Club and Wilson McGinley Inc., a wholesale distributor of beer and malt beverages. He currently serves as a director of Duquesne University, emeritus trustee of Saint Bonaventure University, and chair of the Rita McGinley Foundation. He chaired Pittsburgh Mercy Hospital through its joiner with UPMC.

Jack is the chair of the Rita M. McGinley Foundation, which provides funding for college scholarships and aid to the homeless, among other causes. He also serves as the challenge grant coordinator for Attorneys Against Hunger, an annual campaign administered by the Allegheny County Bar Foundation that has administered more than $1.3 million in grants since it was established in 1993.