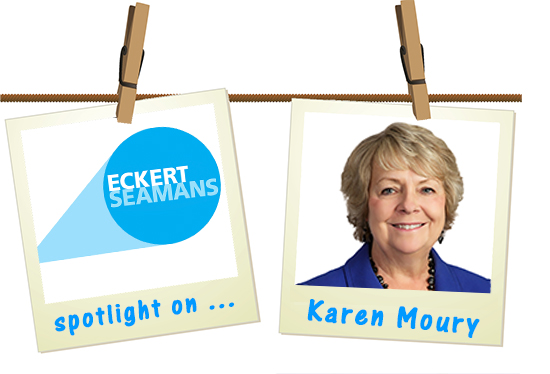 Karen O. Moury joined Eckert Seamans’ Harrisburg office in 2016. She grew up in small towns in Mercer County, Pennsylvania. She graduated from Grove City Area School and went on to attend Thiel College in Greenville, Pa. Today, she lives on the East Shore, between Harrisburg and Hershey. Once she came to Central Pennsylvania to attend the Dickinson School of Law in Carlisle, she never moved back to her old stomping grounds, but says she’s “still a Mercer County girl at heart and will always bleed black and gold!”

Karen has more than 30 years of state government and administrative law experience, including 16 years in executive and management level positions. As a member of the firm’s utilities, telecommunications, and energy practice groups, Karen represents and counsels clients on various issues related to public utility and administrative law. She represents companies before the Pennsylvania Public Utility Commission (PUC), other government agencies, and the Commonwealth Court, and has been involved in matters involving licensing, regulatory compliance, and enforcement proceedings. She has also represented electric suppliers in high-profile litigation initiated by the Pennsylvania Office of Attorney General, Office of Consumer Advocate, and PUC’s Bureau of Investigation and Enforcement. Prior to entering private practice, she served as director of regulatory operations for the Pennsylvania PUC. She is a graduate of the Commonwealth’s Leadership Development Institute and has participated in numerous international delegations on behalf of the PUC.

Karen has two adult sons — Clint, an automotive mechanic in Harrisburg, and Sean, who served in the U.S. Marine Corps and is now teaching math (in English) to high school students in Dongguan, China. Karen sees Clint and his wife and their two dogs frequently – “We almost always get together for Sunday night dinner,” she says. Sean will stay with Karen during his summer break, and she hopes to meet up with him soon in Hong Kong.

For my first 12 years, I lived in Mercer within a block of one of the most majestic county courthouses I have ever seen. Right in the square, the courthouse was at the center of everywhere we walked or drove. I have often thought that the seed for a career in law was planted during that time. When I got to college, I initially majored in psychology and didn’t really know what I was going to do with the degree. But I found that I really enjoyed my political science classes and discovered that some of my fellow students planned to be lawyers. That idea appealed to me, so I switched majors at the end of my first year and told the head of the Political Science department that I was going to law school. He looked over my grades (that were honestly earned during some first year partying) and told me I better have a back-up plan. Obviously, that ended up being unnecessary. Ten years ago, Thiel College gave me a distinguished alumni award for my successful career in law and he was there to proudly present it to me.

What I enjoy most about my practice is using my knowledge, experience and relationships to help our clients navigate their way through the Public Utility Commission. Coming up with creative solutions with my colleagues and our clients and working with passionate, brilliant people really seal the deal.

What makes you laugh?

I laugh easily and often, including at myself.

What do you like to do on the weekends?

From early spring to late fall, I like to golf on the weekends. I didn’t start playing golf until my mid-40s and I think I peaked in Year 3 only to plateau and then get progressively worse after that, but I enjoy it. Beautiful surroundings, camaraderie with friends, a little competition, an adult beverage or two… what’s not to love? Also on weekends, I enjoy getting together with friends and family, as well as reading, watching sports, and figuring out the next remodeling project for my house.

A college friend and I want to go to a game at every Major League Baseball stadium. We have been to several of them already – not necessarily together – and we’re working toward our goal. We hope to check at least one off the list this summer!

Who or what inspires you?

My parents inspire me. They grew up in tiny towns in Western Pennsylvania – Mundy’s Corner and Nanty Glo, near Johnstown. They made the most of the opportunities that presented themselves and built an incredibly successful life together. My mom, who passed away in October of last year, always pushed me to do my best but also encouraged me to learn from my mistakes and move on. She embodied the motto “Live, Laugh, Love.” My dad inspires me on a daily basis with how well he does at the age of 91, but he has been inspiring me for many years. Just as I was heading off to law school, I told him I was concerned that maybe I wasn’t smart enough to be there with kids from bigger cities, high schools and colleges. Although he told me he thought I was really smart, he said he didn’t know anything about law school and couldn’t say for sure if I was smart enough. But what he could say for sure is that he didn’t want me to have any regrets. So he said I should give it a try if it was what I wanted to do and if it didn’t work out, I could do something else. The freedom to fail was all I needed to succeed.

What is a book that everyone should read?

Everyone should read To Kill a Mockingbird.