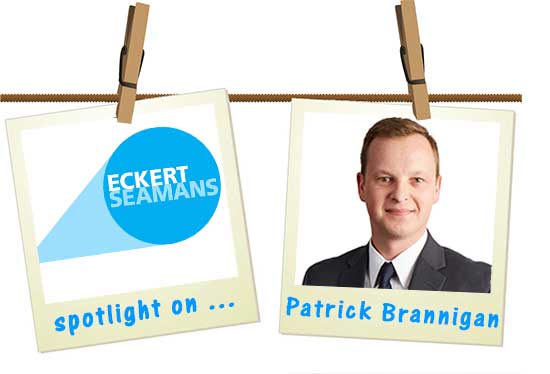 Patrick Brannigan joined Eckert Seamans’ Wilmington office in 2015, and was promoted to member in May 2018. He grew up in Doylestown, Pennsylvania. He’s called Wilmington, Delaware, home for the past 12 years. He is the son of a retired airline pilot, and his mother works as a flight attendant. He has a twin sister, a younger brother, and is the proud uncle of four nieces and nephews.

Patrick focuses his practice on mass tort, professional liability, and general litigation matters, managing all aspects of litigation from inception to completion. He has represented clients in all courts in the state of Delaware, including the United States District Court for the District of Delaware, United States Bankruptcy Court for the District of Delaware, Superior Court, Court of Common Pleas, Justice of the Peace Courts, and Court of Chancery. He has effectively and aggressively defended his clients at depositions, throughout discovery disputes and in motions practice. Patrick also provides trial and litigation support when necessary.

Prior to embarking on a career in civil litigation, Patrick served as a deputy attorney general for the State of Delaware for almost four years, working under former Attorneys General M. Jane Brady, Carl C. Danberg, and Joseph R. Biden III. As a criminal prosecutor who managed a number a cases, Patrick gained significant trial experience and valuable legal skills such as case and evidence evaluation, negotiation and resolution techniques, motions practice, legal writing, and examination strategies.

Prior to graduating from Saint Joseph’s University in Pennsylvania, where I majored in criminal justice, I applied to take the written examination to become a police officer. Having heard nothing, and with graduation rapidly approaching, I knew I had to find something else to do. I had friends who were planning on going to law school and were preparing to take the LSAT. I figured that would be a step in the right direction (or a direction); so, I applied to take the examination as well. It was not until I was completed almost two years of law school that I finally received word that I was eligible to sit for the written examination. At that time, it was a bit too late; however, my first job out of law school was as a Deputy Attorney General for the State of Delaware, which was in the law enforcement field.

While the practice of law is difficult, and can be stressful, it brings with it unique challenges that make each day different than the previous one. We often represent the same clients in the same or similar matters; however, it is important to treat each case as if its novel and unique. Much of the law is not black and white, but is gray. I enjoy being able to educate myself on decisions that need to be made in those gray areas, informing our clients of issues that are presented, and assisting them in taking the next step that advances their goal or goals in any type of litigation.

My grandfather was an artist, which I always found interesting. When I was (much) younger, I did enjoy drawing. I also have an uncle who is a retired police officer, which is something I always considered.

What’s one thing people would be surprised to know about you?

People are always fascinated by the fact that I have a twin sister. She is one of the people I enjoy most on this earth.

What’s one of your favorite hobbies or pastimes?

Since Netflix and Amazon Prime have come into prominence, my other hobbies and pastimes have suffered a bit. I used to play a little guitar, and dabbled on the ukulele. I’ve always loved going to see a movie (in the movie theater), because I think the experience is just better. There is just something to be said about a sticky floor and the smell of butter that keeps me going back, despite the cost.

We recently re-watched all 9 seasons of The Office. It still holds up, and is better than most shows on television today.

What is an app that you can’t live without?

The Amazon app has kept me from making extra trips to the mall, grocery store, convenience store, and/or any other store you can think of.